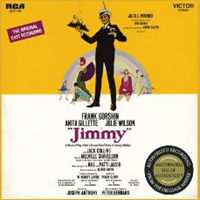 (1 / 5)This misbegotten musical biography of New York Mayor Jimmy Walker has three unsympathetic protagonists, a leading man who can barely hold a note, and a score that aspires to Jerry Herman-like friendliness but can’t come up with a single memorable melody or impressive lyric. Producer Jack Warner probably selected Frank Gorshin to star because his compact Irishness reminded him of Jimmy Cagney. Unfortunately, Gorshin exhibits a wavery, raspy voice, and he has no sense of how to shape a song. This isn’t to say that the songs, by Bill Jacob and Patti Jacob, are in any shape for shaping; the best they can do is wallow in New York platitudes, as in “Riverside Drive,” or try to overlay some trendy, soft-rock sounds onto the Prohibition milieu, as in “What’s Out There for Me?” Anita Gillette is hard-edged as Jimmy’s mistress, and as his neglected wife, Julie Wilson hard-sells the torcher “I Only Wanna Laugh.” They’re pros, but they’re wasting their time. The relentlessly bright sound of the RCA recording makes the whole thing seem even worse than it is. — Marc Miller