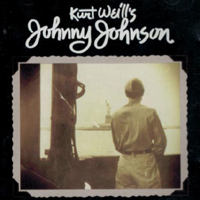 (5 / 5) Kurt Weill’s first American musical, with lyrics by Paul Green, gets a thrillingly theatrical workout in this recording. Musical director Samuel Matlowsky is in firm control of a remarkable cast that includes Burgess Meredith, Thomas Stewart, Evelyn Lear, Hiram Sherman, Jane Connell, Scott Merrill, and Lotte Lenya. Weill’s score features tangos, cowboy songs, Victorian-era love songs, group numbers, marches, torch songs, French cabaret numbers, German lullabies, and an abundance of orchestral and dance music. The score is much more sophisticated than Green’s book, which is a victim of bad timing and overwriting about the wartime plight of innocent soldiers. Anti-war pieces were a staple of the post-World War I years, but by 1936, when Johnny Johnson opened on Broadway, the theme wasn’t as valid; Johnny’s sweet, anti-war gropings paled when compared with the genuine evils of Hitler. Still, this is a score filled with imaginative moments. Because attempts at revival have failed, this exciting album may remain the best way to fully appreciate Weill’s considerable achievement. — David Wolf 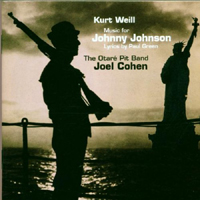 (3 / 5) This recording of Johnny Johnson was inspired by a 1996 performance of the Boston Camerata at the Longy School. It contains a lot more music than its predecessor, including more incidental music and additional verses to some of the songs, and it gives us quite a bit of material that was cut from the original production: “Farewell, Goodbye,” “The West-Pointer Song,” “The Sergeant’s Chant,” “The Tea Song,” “The Asylum Chorus,” and an instrumental reprise of “Farewell, Goodbye.” Also, this studio cast album is in excellent stereo sound, as compared to the mono original. But my vote still goes to the first recording, which has an extraordinary cast of singing actors, a more theatrical feel, and sharper musical direction. Here, Joel Cohen’s musical direction is soft, and though all of the performers sing well, they are noticeably uncomfortable when they have to speak dialogue. — D.W.