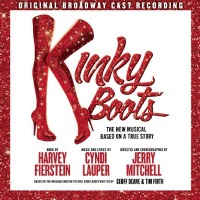 (3 / 5) Kinky Boots marked 80’s pop icon Cyndi Lauper’s debut as a Broadway songwriter. Based on the film of the same title, the musical is about the owner of a struggling shoe factory in England who revives his business by teaming with a transvestite and making shoes for men who love to don heels. Though it may sound like indie fare, the show became an instant success, winning the Tony Award for Best Musical and nabbing Lauper a Tony for her work, as well. For a freshman effort, it’s a fun, admirable score, but there is still some room for Lauper to grow as a musical theater writer. Musically, she is very gifted, and her pop sound provides the cast album with many catchy tunes. With the help of crisp arrangements and orchestrations by Stephen Oremus, songs such as “Everybody Say Yeah” and “In This Corner” create a sense of heat and fizz, allowing the cast to let loose and show off their vocal dynamics. As a lyricist, Lauper is at her best when cheeky; songs like “Land of Lola” or “Sex is in the Heel” work because of their sly flirtatiousness (e.g., “We give good epiphany”). However, when Lauper becomes more earnest, as in “Son of a Man” and “Take What You Got,” she has trouble conveying the characters’ thoughts without the lyrics feeling on the nose and sometimes generic. One exception is “Not My Father’s Son,” a moving ballad in which the two main characters, Charlie and Lola, played well by Stark Sands and Billy Porter, realize that they share a common trait in diverting from the paths that their fathers had wanted them to follow. This song exhibits a lyrical and musical restraint that allows the audience to connect with Charlie and Lola on a relatable, human level. Although Kinky Boots shines most brightly when it presents its sassy side, it could have used more songs like that. — Matt Koplik