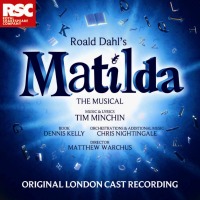 (5 / 5) This recording reflects the Royal Shakespeare Company’s world premiere production of the musical Matilda, based on Roald Dahl’s book about a precocious, five-year-old British girl. A rather dark, cerebral show that also happens to be wickedly funny, charming, and moving, Matilda is in some ways the antidote to Annie; whereas the redheaded orphan patiently waited for the sun to come out tomorrow, Matilda fights to change her life and the bad deck of cards she has been dealt, including a moronic family that doesn’t care about her and a fearsome headmistress who hates children in general. For his first musical theater work, Australian comedian Tim Minchin has written a stellar score, one with playfully odd melodies and deliciously smart lyrics that fit the wonderfully twisted world of Dahl perfectly. There’s much fun to be had in “Naughty,” “Telly,” and other songs; and when Matilda shows its heart, it thankfully doesn’t wear it on its sleeve like so many children-centered shows. Songs such as “Quiet” and “My House” are simple and understated (a rarity in modern musical theater), allowing the actors to live in them and explore their dramatic potential. Christopher Nightingale’s orchestrations are by turns playful (“Miracle”), funky (“Revolting Children”), and beautiful (“I’m Here”). The cast of this recording is wonderful, with three young performers covering different tracks of Matilda (because they rotated in the role on stage). Special praise goes to Bertie Carvel, who plays the headmistress, Miss Trunchbull. Avoiding camp, Carvel instead performs like a dry, British piranha, making the character’s evilness funny yet still menacing. Perhaps the greatest song on this album is “When I Grow Up, ” by far the most uplifting number in the score: “When I grow up / I will be brave enough to fight the creatures / That you have to fight beneath the bed / Each night to be a grown up.” It reveals that, for all its cleverness and mischief, Matilda is at its core an optimistic show. — Matt Koplik 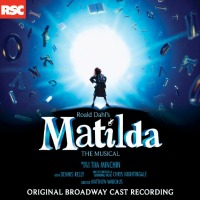 (3 / 5) Here we have a rare situation: a London cast album is actually preferable to the recording of the Broadway incarnation. While all of the new performers are as talented as their predecessors, and much is the same in terms of material (there is more dialogue included on the OBC recording, and there are some minor lyric changes), something is slightly off here. In trying to “Broadway-ize” the piece, Matilda’s creators made the show a difficult listening experience. Perhaps the biggest problem is/are the new orchestrations by Christopher Nightingale; brassy and brash, they frequently overpower the singers (even on the recording), making it hard to understand Minchin’s brilliant lyrics. Perhaps to compete with the orchestra, the performances of this cast are broader, less smart, and less human than those of the British company. Even Carvel, repeating his role of Miss Trunchball, seems less funny and more fidgety than before. On the bright side, Lauren Ward as Miss Honey, also returning from the London production, is just as touching and perhaps even stronger vocally than on the previous recording. She is the sole caring adult character, and the beating heart of the show. All of the Matildas here (four of them, as opposed to the British three) are smart actresses and talented singers. Thankfully, for their tracks, Nightingale chose to remain faithful to his original orchestrations.  — M.K.