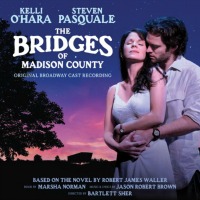 (4 / 5) Robert James Waller’s novel about an Italian war bride’s brief affair with a photographer who passes through her Iowa town became a cultural phenomenon and something of a joke in the mid ’90s. While some were swept up in the romance of the story, others rolled their eyes at the corniness of the dialogue and proceedings. The fact that Jason Robert Brown was able to mine a great deal of musical theater gold from his source material — so much so that he won a Tony Award for his efforts — speaks very well of his craft. In the role of Francesca, the Italian housewife, Kelli O’Hara is in top form on the cast album. She wraps her silvery soprano around Brown’s gorgeous melodies, all the while giving a mature, grounded performance that makes songs like “Almost Real” and “Look at Me” particularly moving. Steven Pasquale is every bit her equal as Robert, the photographer with whom Francesca falls deeply in love; his glorious baritone is rich, strong, and masculine, bringing to mind classic leading men of the Golden Age. Together, these two make the recording essential. Their voices blend to such rapturous effect that their duet “One Second and a Million Miles” is not only the highlight of the whole album, but one of the best love duets written for musical theater in recent years. That said, while the entire score is gorgeous to listen to, the musical loses dramatic steam when Brown and librettist Marsha Norman expand the story to focus on several other characters — and the songs for those characters, though catchy and technically well done, reflect that. The twangy “State Road 21” is a jarring follow up to the wistful “Falling Into You” and is skippable on the album, as are “Something From a Dream” and “Get Closer.” One fine exception is “Another Life,” sung beautifully by Whitney Bashor as Robert’s first wife; the song chronicles the couple’s courtship, marriage, and divorce, and it’s the only one that competes with the songs for Francesca and Robert. Brown’s orchestrations, for which he won another Tony, are lush without being sentimental, and they have a slight country edge. Even with a few substandard songs,  Bridges is true romance whenever O’Hara and Pasquale are front and center. — Matt Koplik