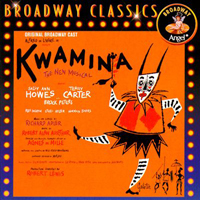 (4 / 5) So, which Broadway composer stretched himself the most in writing a score that no one would have guessed he had in him? Jerry Herman with Dear World? Good answer. Stephen Schwartz with The Baker’s Wife? Better answer. Richard Adler with Kwamina? Best answer! Adler, who had previously co-written two all-American musical comedy hits, The Pajama Game and Damn Yankees, here took on African tribal music and scored astonishingly well. The album starts off arrestingly with “The Cocoa Bean Song,” in which African laborers sing of their relationship to their crop: “One does the drinkin’, the other gets drunk.” “Nothing More to Look Forward To” has a glorious, Bantu-inspired melody, and it’s a shame that the Kingston Trio’s cover version wasn’t included as a bonus track on the CD edition of this recording. Both music and lyrics sparkle in “One Wife,” which gives us the tribe’s atypical views on monogamy, and “Something Big,” the African colony’s cry for independence from England. But — and a big but it is! — much of the show deals with two doctors, Kwamina (Terry Carter), an African educated in England, and Eve (Sally Ann Howes), a British woman. And, alas, most of their songs are routine. — Peter Filichia