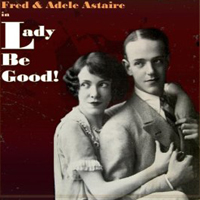 (5 / 5) Here is one of the great artifacts of the American musical theater — and it’s also a great listen. One of a series of Smithsonian reconstructions released during the 1970s, this album of the 1924 George and Ira Gershwin musical Lady, Be Good! is probably the best of them. After Fred and Adele Astaire finished the show’s Broadway run, they repeated their roles in London, where they recorded six of their songs (and English cast member William Kent recorded one more). George Gershwin himself played piano for four of the sides, and all of them are simply delightful. To be able to hear Fred and his legendary sister perform “Hang On to Me,” “Fascinating Rhythm,” “So Am I,” “Swiss Miss,” ”I’d Rather Charleston” (added for the London run), and “The Half-of-it-Dearie Blues” (in which Fred dances and clowns with Gershwin) is simply remarkable. In addition, original cast member Cliff Edwards, mostly remembered as Jiminy Cricket’s voice in Disney’s Pinocchio, sings a couple of numbers, and the duo-piano team of Phil Ohman and Victor Arden is also heard. A few Gershwin piano solos, drawn from old radio broadcasts and a 1924 piano roll, add more delights. — David Wolf 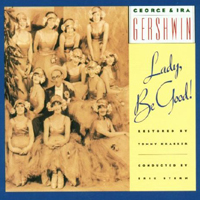 (3 / 5) This recording, like others of the well-intentioned Gershwin releases from Roxbury, fails to recreate the musical comedy spirit that made Lady, Be Good! a touchstone of the Roaring Twenties. Too often, it feels like an academic exercise, busily reconstituting original orchestrations and performing styles. It may be authentic, but it isn’t very enjoyable. Except for female lead Ann Morrison, most of the cast, especially the male principals, sing everything very squarely and right on the beat. However, John Pizzarelli is charming in emulating the vaudeville looseness of Cliff Edwards from the original cast. And when Jason Alexander arrives near the end of the first act with the title song and some terrible jokes, he offers a welcome burst of energy. As always with this label’s releases, the booklet accompanying the CD is extensive and terrific. — D.W.