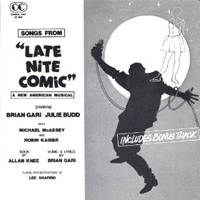 Studio Cast, 1988 (Original Cast Records) No stars; not recommended. This vaguely autobiographical musical by composer-lyricist Brian Gari, with a book by Allan Knee, lasted for only 15 previews and four performances on Broadway, and it’s not hard to understand why. The plot, such as it is, concerns the off-and-on relationship between a pianist who wants to be a standup comedian and an “off-the-wall” (so the synopsis says) ballet dancer who keeps changing her name. Most of the songs are performed by Gari, whose thin, squeaky voice is even worse than his songs, and Julie Budd, whose singing almost manages to transcend the poor material. Michael McAssey (from the Broadway production) and Robin Kaiser put in special appearances; he and Gari function as the male chorus, she sings a terrible song in the guise of a hooker. The capper is the “bonus track,” an unintentionally hilarious number titled “Late Night Saga” in which Gari melodramatically recounts the sob story of his musical’s fate. It offers the recording’s sole moment of genuine enjoyment in the form of a quote from an unidentified theater critic: “Late Nite Comic, my friends, is so bad that when I went outside for intermission, I stood under the marquee of another theater.” — Seth Christenfeld