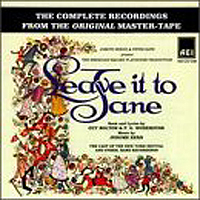 (2 / 5) The “Princess Theater” musicals of Jerome Kern, Guy Bolton, and P. G. Wodehouse form an important chapter in musical theater history that is badly underrepresented on recordings. Although Leave It to Jane, a 1917 college musical, didn’t actually play the Princess, its tight construction, modest production values, and good humor make it a close relative. So let’s be grateful that a cast album was made for this revival, which was a big hit in a tiny theater. (To make their entrances, the actors actually had to go out to the street, down a transom, and through the audience.) That said, the recording is largely a botch. Kern’s graceful, lilting melodies are indestructible, and Wodehouse’s lyrics display his signature wit and self-effacement. But Joseph Stecko, conducting an underpopulated orchestra, wreaks havoc: “The Crickets Are Calling” is supposed to be slow and reflective, not a slapstick chase. Conversely, “There It Is Again” plods here. Kathleen Murray as Jane must have been very charming onstage, because she certainly can’t sing. Dorothy Greener puts “Cleopatterer” across but doesn’t convey the funny/sad pathos of “Poor Prune.” A young George Segal is in the chorus, but you won’t hear him. The show itself remains entirely stage-worthy, with a laugh-out-loud book and a score that’s eminently lovable. — Marc Miller 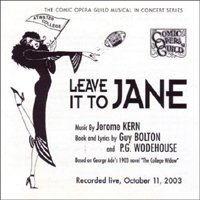 (2 / 5) The Ann Arbor, Michigan-based Comic Opera Guild delights in resurrecting early musical comedy and operetta scores that no one else would think of recording. (The Ameer, anyone?) Their Leave It to Jane is typically dutiful and a little dull; Jane (Diane McEwen-Martin) has a pretty soprano but almost no characterization, nor does leading man Glenn Perry make much of an impression. Among the supporting players, only the Stub Talmadge of David Troiano exhibits some personality, and Katie Cillufo’s Flora misses all the jokes in “Cleopatterer.” Some of the choral lyrics are hard to discern (this is a live recording), and one number from Kern’s Oh, Boy! is bizarrely ushered in to buttress the finale. But hey, it’s a charming score, and the two-piano arrangements are occasionally quite tasty. — M.M.