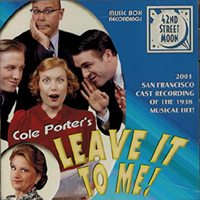 (4 / 5) With political satire a mainstay of 1930s musicals (the Gershwins’ Of Thee I Sing, Rodgers and Hart’s I’d Rather Be Right, Irving Berlin’s Louisiana Purchase), Cole Porter’s turn came in 1938 with Leave It to Me! An amusing if none-too-penetrating look at U.S.-Soviet relations, the show was both a critical and financial success, but history remembers it only as the musical that made Mary Martin a star as she sang and stripteased her way through “My Heart Belongs to Daddy.” Martin’s role was subsidiary to those of Sophie Tucker, Victor Moore, William Gaxton, and Tamara; in hindsight, her success overshadowed the contributions of the stars and the rest of Porter’s score, highlights of which include “Get Out of Town” and the cheeky “Most Gentlemen Don’t Like Love,” the latter with its references to Sappho and rolls in the hay. As with many other Porter shows, Leave It to Me! was neither recorded (except for a couple of Martin cuts) nor filmed, and it is almost never revived. Fortunately, 60 years after the fact, San Francisco’s 42nd Street Moon company tackled it. While most of the original arrangements did not survive, musical director Dave Dobrianksy did a fine job of piecing together the enjoyable score — dance breaks and all. Of course, the lyrics are incredibly witty; in “I’m Taking the Steps to Russia,” Porter rhymes “Harlem rhythm” with “Communithm.” The cast is accomplished, the scaled-down orchestra is dandy, and Marc Miller’s notes are clever and informative. — Richard Barrios