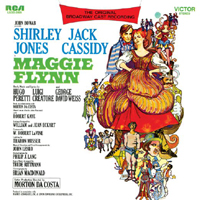 (3 / 5) Hardly remembered today, this show has had only one small-scale revival. It marked the return of Shirley Jones to Broadway, where she began her career in choruses before going on to star in the film versions of great musicals. Playing opposite her was her husband, Broadway veteran Jack Cassidy. Maggie Flynn was directed by Morton DaCosta, who had helmed such hits as Auntie Mame and The Music Man. The book, music, and lyrics were a collaboration of Hugo Peretti, Luigi Creatore, and George David Weiss. With encouraging out-of-town reviews, the musical seemed to have everything going for it, but it opened in New York to decidedly mixed notices. “The Thank-You Song” may seem to be a poor man’s “Do-Re-Mi,” but there’s more to Maggie Flynn than that number. Cleverly using the New York City draft riots of 1863 as background for a romance as well as a story of racial tolerance, the show has a tuneful score that made for a really fine cast album. “Why Can’t I Walk Away?” is powerfully sung by Cassidy as Maggie’s ex-husband Phineas. Whether delivering the lullaby “Pitter Patter” or the rousing “Mr. Clown,” Cassidy uses his voice to great advantage. As Maggie, who runs an orphanage for black children, Jones sings beautifully in the clear-as-abell soprano that helped make her a star, and she’s just as engaging when belting out the cheery “Nice Cold Morning” and the sly “I Wouldn’t Have You Any Other Way.” Among the orphans are future stars Stephanie Mills, Irene Cara, and Giancarlo Esposito; the group as a whole sounds glorious, especially in the chilling “The Game of War.” Robert R. Kaye is in fine voice as Colonel Farrady (Maggie’s beau). The title tune is introduced as a ballad for Cassidy and later turns into an up-tempo production number. The recording concludes with Jones singing “Mr. Clown” while Cassidy sings “Maggie Flynn,” the two songs fitting together perfectly. — Jeffrey Dunn