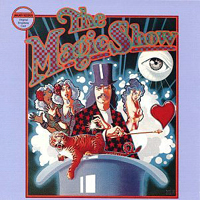 (3 / 5) This musical got the worst reviews imaginable but ran five years, thanks to its star, who could not act, sing, or dance but was a magician unlike any we’d ever seen. A skinny little hippie in jeans with a fresh, artless, chipmunk-cheeked persona, Doug Henning created illusions so startling and imaginative that the show’s hideous physical production and the basic crumminess of its book didn’t matter. On the cast album, Stephen Schwartz’s songs jump lightly from one pop genre to another in a casual, genial style of writing. This is a brief score and a minor one, but it’s not without its pleasures. The only interestingly conceived character is a beautiful young woman named Charmin, who in the show materialized before our eyes in a plexiglass box. Whenever any magician needs to conjure up a beautiful woman, it’s her — and she’s sick of it. “Charmin’s Lament,” a mock country-western number, is performed by the funny, genuinely sexy Anita Morris. Although “Lion Tamer” may be a bit too on-the-nose as ingenue Dale Soules’ first song, it’s still appealing. David Ogden Stiers’ villainous set piece “Style” is helped by the cheerful oddness of its music, as is “Two’s Company.” The most well remembered number of the score is probably “West End Avenue. ” Belted intensely by Soules, the song is skillful and effective if a tad overwrought. Henning doesn’t sing at all; his entire performance on the cast album consists of one line, spoken unsurely.  — David Wolf