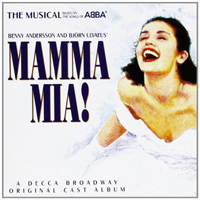 (2 / 5) Die-hard musical theater fans love to hate this international mega-hit, which showcases two dozen songs by the hugely popular 1970s Swedish pop group ABBA. It was arguably the first and one of very few musicals to date that achieved great success at the box office by working pre-existing tunes into a new libretto. Well, in this case, sort of new: Catherine Johnson’s book is remarkably similar to the screenplay plot of Buona Sera, Mrs. Campbell, which also inspired the flop Broadway musical Carmelina. The heroine of Mamma Mia! is Donna, who keeps a tavern on a tiny Greek island and is making plans for the wedding of her daughter, Sophie. Wanting to find out who her father is, Sophie invites the three most likely candidates to the wedding, thereby setting the stage for farcical complications. The songs, by Benny Andersson and Björn Ulvaeus (the male half of ABBA; Stig Anderson also contributed), often have only the barest acquaintance with the story, and at any rate, the album contains no plot synopsis. This Euro-pop is irresistible, the no-star London cast performs with verve, the songs are well arranged by Martin Koch to emulate the original versions — and yet, the recording isn’t really necessary, given the existence of the greatest hits collection ABBA Gold. — David Barbour 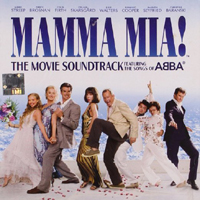 (1 / 5) The London cast album was charming, if unnecessary. This recording is merely unnecessary. Think “karaoke night in a Malibu bar” and you’ve got an idea of this misbegotten project, in which a group of stars who are mostly under-endowed vocally try to demonstrate their pop musical comedy chops. Two of them do have the goods: Christine Baranski has a fun time partnering with actor Philip Michael on “Does Your Mother Know,” and Meryl Streep makes something reasonably touching out of “The Winner Takes it All.” Otherwise, the cast of wobbly warblers is largely drowned out by Gorän Arnberg’s bombastic orchestrations. The men fare worst: In “Our Last Summer,” Colin Firth, Pierce Brosnan, and Stellan Skarsgård seem locked in a competition to see who can sing the flattest. Brosnan is even worse in “When All is Said and Done,” a song not used in the stage edition of Mamma Mia! Oddly, one of the few pleasing tracks here is an extra of Amanda Seyfried offering a sensitive version of “I Have a Dream/Thank You for the Music.” The latter is performed only with piano accompaniment, and after all the preceding noise, it’s rather restful. — D.B.