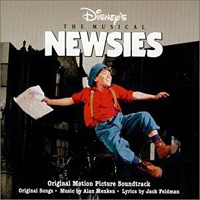 (2 / 5) Listening to the soundtrack recording of  this 1992 movie that starred a young Christian Bale (well before his days headlining much darker films) and Ann-Margret (an ever-alluring presence on screen and disc), you’d be hard-pressed to understand how it might ever be transformed into a Tony-nominated stage musical. Yes, there are small glimmers of terrific music by Alan Menken and clever lyrics by Jack Feldman, notably in such songs as “Santa Fe” and “The World Will Know.” For the most part, however, everything here feels and sounds overblown and forced, from the performers’ exaggerated “Noo Yawk” accents to the often thundering orchestrations provided by Thomas Pasatieri and Danny Troob, the latter of whom would go on to do some marvelous work for the Broadway incarnation of the tuner. Newsies was actually a flop when originally released to theaters, and only later gained great popularity through home video. For completists (and Ann-Margret fans), there are a couple of numbers, “My Lovey-Dovey Baby” and “High Times, Hard Times,” which didn’t make it to Broadway. And for the generation that fell in love with musicals because of this movie, the soundtrack recording remains something to be cherished. For everyone else, though, it’s best to stick with the Broadway cast album. — Andy Propst 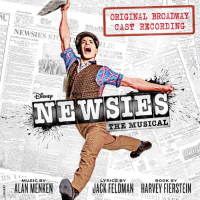 (4 / 5) Alan Menken employs a semi-period, semi-contemporary musical vocabulary for this stage version of the 1992 Disney film of the same title, to terrific effect, and Jack Feldman’s lyrics have a verve and wit that match the melodies beautifully. For those who grew up on the film about a newsboys’ strike against newspaper owner Joseph Pulitzer, the Broadway cast recording has most of the songs that they loved from the movie score, including the soaring “Santa Fe” and the rousing anthem “Seize the Day,” plus a large handful of new ones written specifically for the stage show. Something else this album has that the film soundtrack doesn’t is the enormously appealing presence of Jeremy Jordan, who, beyond sounding terrific from a musical/vocal standpoint, brings a great balance of streetwise toughness and vulnerability to his portrayal of the strikers’ leader, Jack Kelly. Other fine work includes Kara Lindsay’s smartly pert performance as a girl reporter who becomes Jack’s love interest, and Capathia Jenkins’ saucy turn as a music hall performer. The odd thing about the recording is that the show’s big dance numbers appear twice — once each in truncated form, then again as bonus tracks in full versions with dance breaks that feature Mark Himmel’s arrangements, excitingly orchestrated by Danny Troob. Having the complete tracks at the end of the album means that listeners who want to get a full sense of the show, or to re-experience what they saw in the theater, have to set up a special playlist with the proper run order. It’s cumbersome, and it ultimately detracts from the recording’s ability to genuinely communicate the thrill that live audiences got from this sleeper hit. — A.P.