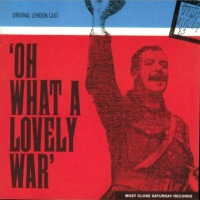 (4 / 5) A hit in London, a flop d’estime on Broadway, and the basis of a very odd film, Oh! What a Lovely War was a show that slotted vintage World War I tunes amid sketches/vignettes while the names of battles and numbers of war dead rolled by on an upstage flashing-lights billboard. Directed by Joan Littlewood, the show was billed as a “musical entertainment,” but the material can be quite upsetting. This recording captures its essence to strong effect with lengthy sequences of the score and dialogue. Many of the tunes are familiar, but some of them are outfitted with special wartime lyrics. The numbers are alternately sardonic (a postwar parody of the famous Kern song “They Wouldn’t Believe Me”), amusing (the saucy “Hitchy-Koo,” the recruiting song “I’ll Make a Man of You”), and moving (Ivor Novello’s “Keep the Home Fires Burning,” beautifully sung by Myvinwy Jenn). A particularly poignant sequence takes place on Christmas Eve in a trench, as English soldiers make temporary peace with German soldiers; it concludes with Victor Spinetti as an emcee leading a lighthearted “Goodbye-ee” that fades into sounds of distant gunfire. — Jeffrey Dunn 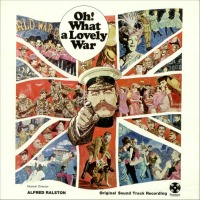 (2 / 5) Directed by Richard Attenborough, the film version of Oh! What a Lovely War found its own way to interpret the kaleidoscope of scenes and songs from the dazzling stage show. Unlike the London cast album, which includes a lot of dialogue, the soundtrack LP has only the songs. Some of them are given big, Hollywood-style orchestrations, others are arranged and performed more atmospherically, and there are also some medleys and instrumental tracks. “Belgium Put the Kibosh on the Kaiser” is charmingly sung by Jean-Pierre Cassel. In a recruiting sequence, Peggy Allen lends her bland soprano to “We Don’t Want to Lose You,” but then Maggie Smith takes over and grabs our attention with “I’ll Make a Man of You.” Smith has a commanding belt that will surprise listeners; her performance alone makes the soundtrack album noteworthy. Most of the other singing is lacking in personality, and because the songs are heard completely out of context, they aren’t as heartbreaking as they are on the stage cast album. — J.D.