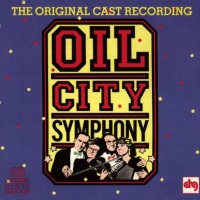 (2 / 5) Here is one of the most disappointing cast albums ever made in that it utterly fails to capture the hilarity of this show. Oil City Symphony was a straight-faced send-up of small-town musical programs, with a cast/creative team that consisted of Mike Craver, Debra Monk, Mark Hardwick, and Mary Murfitt. The show’s great appeal lay in the ingenuous earnestness of a group of people trying their best to present a concert in their decorated high school gymnasium, but goofing up — rather than measuring up — all along the way. Oil City was performed with no winking and no irony, and after each performance, lemonade and cookies were served in the lobby by the smiling cast. The score features new songs by the creative team, along with ringers such as “Baby, It’s Cold Outside,” “Dizzy Fingers,” and “Stars and Stripes Forever.” One interpolation was Ernest Gold’s “The Exodus Song,” for which Monk, a vision of ex-debutante propriety, played the drums with a vengeance. She really whacked the bejesus out of that trap set, unleashing what seemed to be a millennium’s worth of pent-up frustration. It was uproarious. Other songs were touching and charming, always presented in character. Oil City Symphony was the funniest musical revue of its time, but admittedly, it would have been very difficult to preserve its brilliance in an audio-only recording, and this album does not succeed in doing so. — Ken Bloom