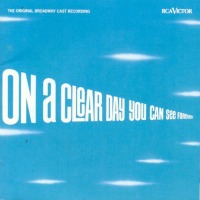 (5 / 5) This is a fabulous score. Alan Jay Lerner’s lyrics are among his wittiest and most poetic, while Burton Lane’s music is as melodic and moving as anything ever written for the stage. Although Lerner’s libretto for On a Clear Day You Can See Forever has been deemed problematic, the show’s songs have endured. Indeed, the title song became a standard. Robert Russell Bennett’s beautiful orchestrations were played by an augmented orchestra for this recording, masterfully conducted by Theodore Saidenburg. Barbara Harris is blissfully captured here in the dual-identity leading role: Daisy in the present, and Melinda in a past life that emerges under hypnosis administered by Dr. Mark Bruckner. In the latter part, John Cullum, with his strong, stalwart voice, has never sounded better than he does on this album. Particularly enjoyable are his renditions of “Come Back to Me,” “Melinda,” and the title song. William Daniels and Clifford David are also outstanding in supporting roles; Daniels’ deadpan delivery of “Wait Till We’re Sixty Five” makes this witty number a comic gem, while David does a beautiful job with the lovely ballad “She Wasn’t You.” The entire recording is a thrilling experience, from the magnificent fanfare that begins the overture to the spine-tingling finale in which the chorus joyfully sings “forever and ever and E-VER-MORE!” — Gerard Alessandrini 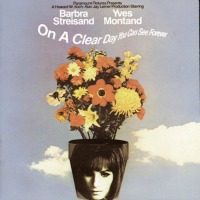 (3 / 5) On a Clear Day was reconfigured as a film vehicle for Barbra Streisand, with mixed results. A good bit of the score remained intact, but some appealing songs are missing, such as the funny “Wait Till We’re Sixty Five” and the catchy “On the S.S. Bernard Cohn.” Also, Alan Jay Lerner’s original lyrics for “She Wasn’t You” were replaced; Burton Lane’s melody remains, but Lerner revamped the lyrics so that Streisand could sing the song as “He Isn’t You,” and the new version pales by comparison. While Streisand’s great voice and solid acting talent are well suited to the leading role(s), the film soundtrack is marred by the performance of co-star Yves Montand as the doctor, here named Marc Chabot. His singing on the album is not unpleasant, but his difficulties with the English language prevent him from communicating the nuances of Lerner’s ingenious lyrics; “Come Back to Me” suffers greatly in this respect. More bad news is that Nelson Riddle’s musical arrangements are not up to snuff. So, even though Streisand’s renditions of “Hurry, It’s Lovely Up Here,” “What Did I Have That I Don’t Have?” and the title song are among the best things she’s ever recorded, the soundtrack is less than terrific overall. — G.A.