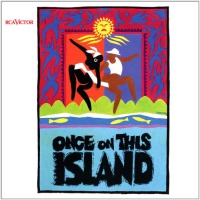 (4 / 5) One of the strongest works to date by lyricist Lynn Ahrens and composer Stephen Flaherty, Once on This Island is a juicy adaptation of the Rosa Guy novel My Love, My Love. The story, set in the Antilles: A young, dark-skinned peasant girl named Ti Moune rescues a wealthy Beauxhomme (a lighter-skinned product of mixed native and French stock) named Daniel from a car wreck, and offers her life to the gods in exchange for his. The tale is told with honesty, simplicity, and a wonderful musicality. From the opening number, in which the peasant storytellers explain their way of prayer (“We Dance”), through joyous moments (“Waiting for Life,” “Mama Will Provide”) and beautiful ballads (“Forever Yours,” “Some Girls”) to the jubilant finale (“Why We Tell the Story”), the songs are dramatically and emotionally acute. There’s only one exception: “The Human Heart” is bland and completely extraneous to the score. The rest of the songs are transporting and gorgeous, and Michael Starobin’s orchestrations are generally brilliant. Heading the strong cast are the shimmering LaChanze as Ti Moune; the romantic Jerry Dixon as Daniel; the enveloping Kecia Lewis-Evans as Asaka, Mother of the Earth; the menacing Eric Riley as Papa Ge, Demon of Death; and the charming Afi McClendon as Little Ti Moune. — Matthew Murray 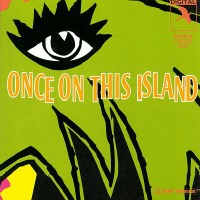 (3 / 5) This recording contains much the same material as the original Broadway album, but it lacks some of the freshness and magic that makes its predecessor so special. Lorna Brown’s Ti Moune is more serious and comes across as older and less energetic than LaChanze’s portrayal. Except for Monique Mason, who doesn’t sound up to the challenge of Little Ti Moune, the other performers are about on par with their Broadway counterparts. One misfire on the recording is a “special mix” of “The Human Heart,” sung by P. P. Arnold in a “pop” arrangement. Everything else here is perfectly enjoyable if never quite as exceptional as the Broadway cast album. — M.M. 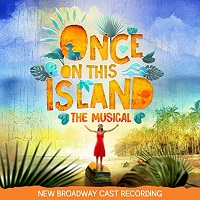 (4 / 5) The production that yielded this recording benefited greatly from its “environmental” and somewhat interactive staging at the Circle-in-the-Square theater, but it was also strong enough in its musical values that the cast album is a great pleasure to hear.  A very young Hailey Kilgore is wonderful as Ti Moune, touching and emotionally vulnerable yet with a core of great strength, as required. Isaac Powell sounds dreamy in Daniel’s music, especially “Some Girls” and his part of “Forever Yours.” Other standouts are Quentin Earl Darrington as Agwe, Merle Dandridge as a female Pape Ge, Alex Newell as a roof-raising Asaka — and it sure is sweet and fun to have Lea Salonga, the original Kim in Miss Saigon, on hand as Erzulie. There are attractive new new orchestrations created by AnnMarie Milazzo, Haley Bennett and Javier Diaz, working with Michael Starobin’s originals. Fans of this score who have the original cast recording firmly imprinted on their brains may at first be slightly put off by some key changes for this one, but once you get used to that, it’s a thoroughly enjoyable listen. — Michael Portantiere