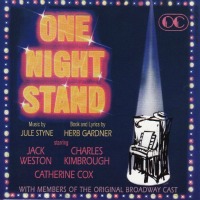 (3 / 5) From overture to finale, One Night Stand is as dynamic a score as Jule Styne ever wrote. But Herb Gardner proved to be inept as a librettist-lyricist in this, his one run-in with musical theater. The plot has possibilities — a famous performer decides to give one last concert, then kill himself onstage — but the lighthearted music is mismatched to it, and Gardner’s lyrics would be wrong in any situation. Styne crafted top-notch melodies for “Don’t Kick My Dreams Around,” “A Little Travelin’ Music, Please,” “There Was a Time,” and “Too Old to Be so Young.” There’s also a quartet of ingratiating leads in Charles Kimbrough, Catherine Cox, Jack Weston, and William Morrison, plus a great set of orchestrations by Philip J. Lang. This was the last of Styne’s Broadway scores to yield a cast album (Treasure Island and The Red Shoes followed, but both went unrecorded), so that’s reason enough to buy this one. — Seth Christenfeld