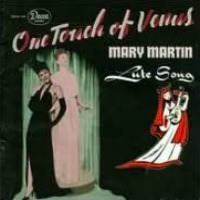 (3 / 5) This incomplete recording of composer Kurt Weill’s One Touch of Venus paints a very deceptive picture of the score. While there are 17 songs in the score, only 10 are to be found here, sung by only two members of the original cast: Mary Martin and Kenny Baker. All of Martin’s material is included, but the songs that were sung in the show by Paula Laurence and John Boles are not. (Actually, Baker inherits one of Boles’ numbers, “Westwind.”) Since the show is, for the most part, a low comedy, the fact that seven of the comic songs are missing from the album means that this Venus misses by more than a touch. But Martin is charming, particularly in the score’s two best songs, ”I’m a Stranger Here Myself’ and “That’s Him,” and Baker’s tenor will appeal to many listeners. The show’s lyrics, by the talented light-versifier Ogden Nash, are witty and filled with amusing wordplay, even if not well integrated with the book by Nash and S.J. Perelman. The music for the two Agnes de Mille ballets, “Forty Minutes for Lunch” and the climactic “Venus in Ozone Heights,” is impressive; even edited as they are here, these pieces are quite stunning. Six songs from Martin’s next show, Lute Song, are heard as bonus tracks on Decca’s CD. — David Wolf 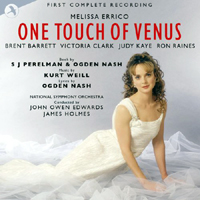 (4 / 5) It took John Yap years to release his complete studio cast recording of One Touch of Venus, but was it ever worth the wait! Lovers of the score will thrill not just to the full song stack, including incidental tunes (this could serve as a reference recording) but also three numbers cut prior to Broadway. Weill’s own orchestrations find their jazzy, snazzy shape thanks to the superb playing of the National Symphony Orchestra under the baton of John Owen Edwards and James Holmes. Maybe not every number is a classic (“Catch Hatch?”), but when you can enjoy Weill’s scintillating dance arrangements of the five ballets, which range in style and content from the comedic to the sensual to the tragic, who cares? Melissa Errico, repeating her 1996 Encores! triumph in the title role, is a major draw; her luscious, shimmering soprano lends an eternal longing and an erotic edge to classic numbers like “I’m a Stranger Here Myself,” “Lonely Heart,” “Speak Low,” and “That’s Him.” But almost everyone here is first-rate, including Brent Barrett as Venus’s milquetoast love interest, Judy Kaye and Lauren Worsham as his constantly sniping would-be in-laws, and Ron Raines as the bitter, art-collecting antagonist, Whitelaw Savory. (Broadway favorite Karen Ziemba even makes a wacky, if extremely brief, spoken cameo appearance.) The only major misstep: Victoria Clark sounds far too prissy, patrician, and out of sorts in the down-and-dirty role of Savory’s wise-cracking sidekick, Molly. But one flawed facet is forgivable, considering that the rest of the recording is a sparkling gem. — Matthew Muray