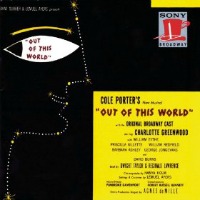 (4 / 5) For Out of This World, a modern-day retelling of the Amphitryon legend, Cole Porter produced a gorgeous score. Unfortunately, it was tied to an unwieldy book that worked too hard to substitute dirty jokes for real wit. Despite a lush production, direction by Agnes de Mille, and the Broadway return of the beloved musical comedian Charlotte Greenwood, the show managed only a four-month run. The songs are so great, and the premise so enticing, that there have been a few subsequent attempts to shore up that messy script. Still, the strength of this show lies in its songs. As Juno, Greenwood is wonderful; while the album can’t deliver her high kicks, it does preserve her ringingly funny way with a lyric. William Redfield is competent as Mercury, zipping with ease through the risqué “list” song “They Couldn’t Compare to You,” but the rest of the casting is uneven. George Jongeyans (later Gaynes) is a wobbly Jupiter. Priscilla Gillette’s voice has sufficient firmness for “Use Your Imagination,” but the vocal inadequacies of her vis-a-vis in the show, William Eyrhe, led to the deletion of the score’s best song: “From This Moment On.” In short, this was one unlucky show, but Porter at his near-best is more than ample compensation for the cast album’s disappointments. — Richard Barrios 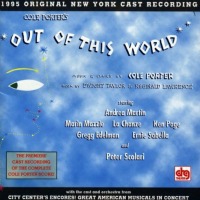 (4 / 5) Out of This World was obvious fodder for a big-league concert performance that could spotlight the songs and stars and elide the worst parts of the script. So it was that the New York City Center Encores! series tackled Cole Porter’s problematic Greco-Roman extravaganza in 1995. The recording that resulted doesn’t always compare favorably with the original Broadway album, but some aspects of it are clearly better and, overall, it’s sheer bliss. Happily, the star at its center is up to her assignment: Andrea Martin is just terrific, especially in her rendition of “I Sleep Easier Now.” For the most part, Ken Page is strong if a dash overbearing as Jupiter; the character should be loud, but there’s always room for shading, isn’t there? In other roles, Marin Mazzie and La Chanze are outstanding, both singing with beauty and spirit. “From This Moment On” is back, and Mazzie and Gregg Edelman do a very good job with it. Peter Scolari is fine as Mercury, Ernie Sabella is a scrappily funny gangster, and Rob Fisher’s Coffee Club Orchestra plays with its customary class. — R.B.