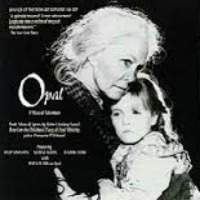 (3 / 5) A Richard Rodgers Award-winner and a minor Off-Broadway hit, this chamber musical by Robert Lindsey-Nassif (or Robert Nassif Lindsey, depending on his preference at any given point in his career) was adapted from the diaries of a French orphan who lived in an Oregon lumber camp circa 1904. It’s a grim tale with a shipwreck, a forest fire, a nasty stepmother with a sad secret, a tragic blind girl, and a Bible-spouting old mystic lady, among other bizarre characters. The lyrics seldom rise above the functional, and the appealing melodies are undercut here by an annoying, synth-heavy orchestration. But what makes the score distinctive is its exploration of the macabre, as little Opal puzzles out the mysteries of death in song. Eliza Clark is refreshingly unaffected in the title role, and she has some formidable musical theater talent behind her: Marni Nixon as the mystic, Rachel York as the blind girl, and Emily Skinner in a small part. The composer-lyricist himself does very well as a lovesick lumberjack in the ballad “Sears and Roebuck Wedding Band.” There are a few dreary numbers, especially those in which the Sunday sermonizing gets heavy. Still, this score has personality — and it should be said that the 1990s brought forth few ensemble numbers as spirited and life affirming as “Everybody’s Looking for Love.” — Marc Miller