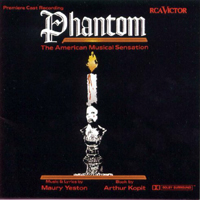 (4 / 5) Unfortunately, Maury Yeston (music and lyrics) and Arthur Kopit (book) began work on their own adaptation of the Gaston Leroux potboiler The Phantom of the Opera concurrently with the Andrew Lloyd Webber version, but Loyd Webber got his to the stage first; so this Phantom, with just as lush music and vastly superior lyrics, has never gotten any closer to Broadway than New Jersey. The whole sordid mess is recounted by Kopit in his notes for this recording, very well produced by Yeston, Steve Vining, and Bill Rosenfield. Yeston’s wide-ranging score roams from the Gothic breast beating of “Paris Is a Tomb” to the lilt of “Melodie de Paris” to the foxtrot “Who Could Ever Have Dreamed Up You?” The sturdy Richard White, in the title role, doesn’t really get to show his stuff till the revelatory 11-o’clock number, “My Mother Bore Me”; but he gives that song the full treatment, going vocally and histrionically to the top, yet not over it. Glory Crampton, as Christine, sounds sweet but thin in her upper range. On the other hand, it’s a pleasure to have the underemployed Meg Bussert as Carlotta, deliberately screeching her way through “As You Would Love Paree” and having lots of hammy fun with “This Place Is Mine.” Jack Dabdoub and Paul Schoeffler are helpful in supporting roles, and Jonathan Tunick’s orchestrations and conducting are, as usual, superb. Best of all, it’s refreshing to hear a Phantom that is musically satisfying and not lyrically pinheaded. — Marc Miller