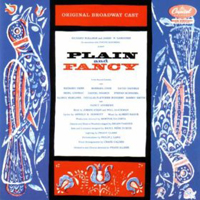 (4 / 5) Listening to a second-rank score, a longtime musical theater lover will marvel at how often just-above-par tuners were a dependable source for Hit Parade clicks. “Young and Foolish,” sung here by David Daniels and Gloria Marlowe, was a major chart-buster thanks to teens of the 1950s, who were becoming the largest segment of the 45-rpm record-buying public. But “It Wonders Me,” “Plain We Live,” and “It’s a Helluva Way to Run a Love Affair” also turned up on the airwaves and in nightclubs — to the gratification, surely, of composer Albert Hague and lyricist Arnold B. Horwitt. Another big number, “This Is All Very New to Me,” is interpreted by the wonderful Barbara Cook on this cast album. The plot, hardly the stuff of great dramatic literature, concerns a couple of Manhattan so-so sophisticates who wander to Bird-in-Hand, Pennsylvania and get mixed up in the restrained romantic entanglements of some stage-quaint Amish folks. The cast boasts a number of accomplished vocalists. Shirl Conway, with her astringent approach to a comic ditty, nails “It’s a Helluva Way …” to the back wall. Cook, whose soaring tones are never flowery (as opposed to Marlowe’s), shows up enthusiastically in the forefront of three songs. Lively Nancy Andrews takes the lead in “Plenty of Pennsylvania” and in the very cute “City Mouse, Country Mouse.” Franz Allers conducts impeccably. — David Finkle