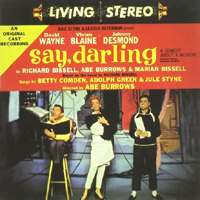 (2 / 5) First, novelist Richard Bissell wrote 7½ Cents, which was turned into the hit musical The Pajama Game. Then he wrote a novella about his experiences on that show, which in turn served as the basis for Say, Darling, a moderately successful “comedy about a musical.” That designation clues us in: This is not really a musical at all, just a play with some incidental songs by Jule Styne, Betty Comden, and Adolph Green. Most of the numbers are performance pieces that don’t advance the plot; some of them, such as “The Husking Bee” and “Chief of Love,” are intentionally cheesy. The two leads, Johnny Desmond and Vivian Blaine, are respectively oily and bland, although it’s interesting to hear Blaine use her contralto belt instead of her Adelaide adenoids. David Wayne, playing a small-town innocent who mixes with Broadway sharpies, has more personality than either of the stars; he puts over the unimpressive “Something’s Always Happening on the River” through sheer force of will. The title song and the waltz “Dance Only With Me” are sweet ballads, and the arrangements and orchestrations by Sid Ramin — created specifically for the recording — are supercharged. But, after a rousing Styne overture, there’s just not much going on here. — Marc Miller