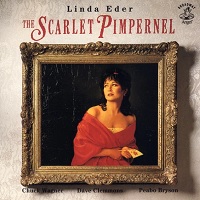 (2 / 5) Here’s a “concept album” for a musical that probably wasn’t a very good idea to begin with — at least, not as composed by Frank Wildhorn, whose show scores have almost all suffered from the fact that he loves to mix modern-day pop music with various other genres. As a result, few if any of his scores exhibit a cohesive style. Wildhorn tends to follow this patchwork method even in period pieces; that’s certainly the case with The Scarlet Pimpernel, which he and Nan Knighton adapted from a 1905 novel that tells a story set at the time of the French Revolution. The effect of careening from goopy pop ballads (“Home Again”) to period pastiche numbers (“Into the Fire,” “They Seek Him Here”) is exacerbated by the fact that the singers featured on this recording represent disparate stylistic worlds, from Linda Eder (Wildhorn’s muse, later his wife for a few years) to Chuck Wagner to Peabo Bryson. All of that said,  one of the highlights of the album as beautifully sung by Eder is “Storybook,” a lyrical 3/4 ballad that has a wonderfully timeless feel to it. Ultimately, Pimpernel never achieved real success as a full-fledged musical, but fans of the score may wish to sample this first recording to hear how it all started. — Michael Portantiere 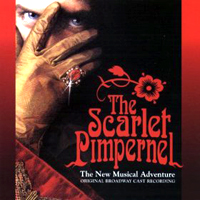 (3 / 5) Despite the antipathy leveled at this effort by composer Frank Wildhorn and lyricist Nan Knighton to adapt the Baroness Orczy’s classic novel into a lavish neo-operetta for Broadway, The Scarlet Pimpernel has its merits as heard on this recording. The score nods at current conventions but also loads up on fanciful, 18th-century atmosphere, although Wildhorn does occasionally stoop to cheap effects (he never met a key change he didn’t like). Knighton’s lyrics wouldn’t rob Sondheim of any sleep, but they’re at least competent and occasionally better; check out her genuinely witty “The Creation of Man,” which has the nerve to rhyme “haberdashery” with “make a splash, cherie.” Christine Andreas gets the best material, or maybe it’s just that her lustrous soprano makes it sound that way: a luminous “When I Look at You,” a lively “Vivez!” and a Piaf-like “Storybook.” Douglas Sills, in a high-profile debut, brings a rangy tenor and an engaging brio to the title role. As Chauvelin, Terrence Mann growls his way through some lesser, Les Miz-knockoff material. The hard-sell big finishes, needless reprises, and all those key changes can be grating, but such is the stuff of operetta.  — Marc Miller 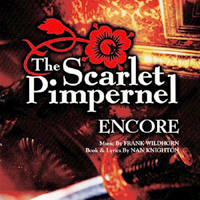 (2 / 5) Although it lost millions of dollars, The Scarlet Pimpernel ran for two years on Broadway, during which time its songs were rearranged, reassigned, etc. This recording, lavishly packaged in its CD edition, reflects all the revisions. The 2.0 version of the show featured not only new material but also new performers in the roles of Marguerite and Chauvelin: Rachel York and Rex Smith, the latter’s rock-star snarls and posturings amusingly out of place amid all the Louis XVI trappings. Changes to the score, all of them unabashedly populist, include a new, heavy-breathing ballad called “I’ll Forget You,” the repositioning of “Storybook” at the top of the show, and so on. Although York is a pro, she hasn’t quite the vocal finesse of Andreas, but Douglas Sills remains in fine, swashbuckling form as the hero. You may also enjoy Smith’s sneering performance, which accomplishes a high-wire feat previously considered impossible: He’s hammier than Terrence Mann! — M.M.