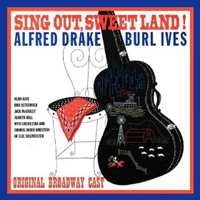 Original Broadway Cast, 1944 (Decca/Stage Door) No stars; not recommended. What’s more surprising: That this “salute to American folk and pop music” was produced on Broadway by The Theatre Guild, or that it managed a 13-week run? With no dramatic content at all, Sing Out, Sweet Land! was a sort of pageant celebrating country and folk music, an Elie Siegmaster compilation of songs that he had collected while traveling the country. Their authorship mostly unknown, the songs include well-known pieces like “Frankie and Johnnie,” “Big Rock Candy Mountain,” “Casey Jones,” and “The Blue-Tail Fly” (“Jimmy crack corn and I don’t care”), as well as others previously heard only in the Kentucky hills or sung by chain gangs — work songs, spirituals, and blues numbers. The show had a book and direction by Walter Kerr, who went on to a career as one of Broadway’s most respected drama critics. Alfred Drake and Burl Ives starred, and Bibi Osterwald, Juanita Hall, and Jack McCauley filled out the cast. But this recording is likely to be of little interest to musical theater enthusiasts, whose first response upon hearing “Jimmy crack corn” may be “I don’t care!” — David Wolf