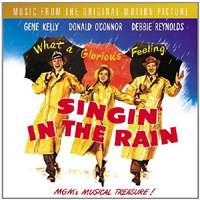 (5 / 5) For many, Singin’ in the Rain remains the greatest movie musical of all time. The mere image of Gene Kelly splashing around in those Hollywood puddles would be enough for some; for many others, the greatness of the film is that it’s one of the rare musicals, on stage or screen, that has a script (by Betty Comden and Adolph Green) equal in quality to its musical moments. If it isn’t possible to sock across the dialogue on a soundtrack album, two CD releases do a great job with the music. As part of its series of releases of MGM musical soundtrack recordings, Rhino-Turner did an excellent job with Singin’ in the Rain. A one-disc version gives us all of the songs plus a few extras; a two-disc set adds still more, including the original recordings of many of the wonderful old songs by Arthur Freed and Nacio Herb Brown  that make up most of the film’s score. All of the movie tracks sound great, and it’s interesting to hear the underscoring without dialogue and sound effects. Another treat is listening in on material that didn’t make it to the final cut of the film: Debbie Reynolds’ rendition of “You Are My Lucky Star,” a “Dear Mr. Gable”-style apostrophe to a poster of Gene Kelly as Don Lockwood; Reynolds’ original attempt at “Would You?”, a song that was dubbed in the final film; and the original fashion-show narration for “Beautiful Girl.” — Richard Barrios 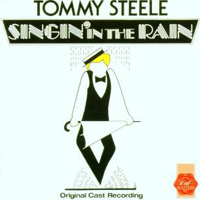 (1 / 5) The greatness of Singin’ in the Rain — the movie, that is — was never more apparent than when it was adapted to the stage. First in London, then in the United States, people worked hard to do so: Both stage versions recreated most of the movie’s best-remembered moments in a script retooled by Comden and Green themselves, with some more songs and a lot of synthetic sparkle added. But it all fizzled out, because taking a movie musical about how movie musicals were invented and adapting it for the stage robs the story of its intimacy and what theorists call self-reflexivity. Plus, with those indelible movie performances firmly in all of our heads, who would be fool enough to try to copy Gene Kelly or Donald O’Connor? Tommy Steele sure would, at least in London. His energetic performance had a big smile pasted on everything, but little going on below the surface; although Steele is a better singer than Gene Kelly, his charm is synthetic. The rest of the cast works valiantly, but this recording stands as a splashy testimonial to the artistic bankruptcy of musical comedy in the 1980s. — R.B. 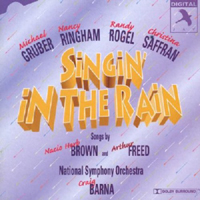 (1 / 5) Following the London staging of Singin’ in the Rain and the flop Broadway incarnation, there was an American tour and a few regional stagings. This recording is based on productions in Houston (Theatre Under the Stars) and New Jersey (Paper Mill Playhouse). It has a bit more heart and soul than the Tommy Steele thing, in part because it’s more successful at capturing the spirit of the original. Once again, however, the sound of the wonderful movie soundtrack simply could not be duplicated — not even under the baton of this recording’s talented and hard-working conductor, Craig Barna. The cast is-nearly faceless: Just listen to Michael Gruber delivering the “Dignity, always dignity” speech in the first scene, devoid of the charm, irony, and ego that Kelly brought to it. Finally, as in the Steele version, this effort washes out in trying to duplicate a 1950s version of a 1920s score. — R.B. 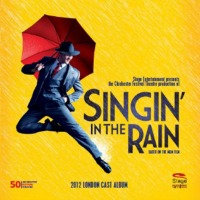 (2 / 5) Given the ever-growing parade of movie musicals to the stage, it was a foregone conclusion that what is possibly the best one of them all would make it back onto the boards, and then back again. A 2011 revival at the Chichester Festival was sufficiently well received to move to the West End, where it ran for well over a year and then toured. This recording is hardly one for the ages, but it is several cuts above the two previous stage cast albums. The three stars — Adam Cooper, Daniel Crossley, and Scarlett Stratten — sing engagingly, most of the performance is reasonably spirited, and very little sounds overbearing or glaringly incorrect. But it does need to be noted that, at least for some listeners, the recording has one unintended fascination: the singers’ on-again/off- again accents. They gamely try to sound as American as possible, but the British intonations always manage to slip through, giving some of the line readings a faint quality of daintiness. This is hardly a new phenomenon, of course, but seldom is it as conspicuous as in this redo of a bona fide U.S. classic. In any case, and like it or not, stage retreads of Hollywood musicals do not seem at this point to be merely a passing phenomenon. This one at least has its heart in more of a right place than some of the others. — R.B.