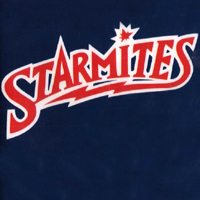 (1 / 5) Starmites earned six Tony Award nominations in 1989, at the end of one of the leanest Broadway musical seasons in history. All about a shy teenager named Eleanor who builds a fantasy world around the sci-fi characters in the comic books she collects, the show has mediocre but functional music and lyrics by Barry Keating, who collaborated on the book with Stuart Ross. Some of the melodies are catchy, such as the title song (which calls to mind “Little Shop of Horrors”), and others are pretty enough — for example, the “Love Duet” between Eleanor and Spacepunk, the Starmites’ “heartthrob captain.” As for the lyrics, some (“Call me macho, a hot-to-trot joe”) are more skillful than others (“Her etiquette’s so delicate”). This recording was made about nine years after the show’s Broadway run; missing are two of the original cast members, Brian Lane Green and Sharon McNight, who were the best things about the production. But Broadway cast member Liz Larsen is back as Eleanor — and, for better or worse, so is Gabriel Barre in the dual role of Trinkulus/Shak Graa. — Michael Portantiere