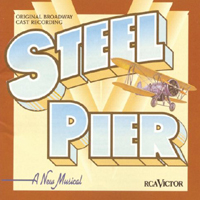 (2 / 5) The idea of a John Kander and Fred Ebb musical set during a 1930s dance marathon sounds like a natural; this milieu would seem to be an ideal backdrop for the team’s trademark blend of cynicism and tough romance. But David Thompson’s book is a drippy, New-Age tale about a stunt pilot (played by Daniel McDonald) who comes back from the dead to save a naive dance marathon contestant (Karen Ziemba) from the clutches of her husband (Gregory Harrison), a promoter who always makes sure that the fix is in. Ziemba’s opener, “Willing to Ride,” and the scene-setting production number “Everybody Dance” are typical Kander and Ebb,  simultaneously hard-edged and ebullient. McDonald’s first big number, “Second Chance,” benefits from a bouncy Kander melody and a clever Ebb lyric. But the authors’ uncertain handling of Harrison’s character is seen in “A Powerful Thing,” which tries unsuccessfully to play the fellow’s nastier qualities for laughs. Debra Monk, as a love-’em-and-leave-’em type, wrestles with two substandard numbers: the crude “Everybody’s Girl” (“I could never be a cowhand’s girl; I just can’t keep my calves together!”) and the maudlin “Somebody Older.” Ziemba’s big second-act solo, “Running in Place,” falls flat. (Orchestrator Michael Gibson is on more solid ground during the lengthy dance sequences.) Ziemba herself is a treat, and diva-watchers will enjoy Kristin Chenoweth, in an early Broadway appearance, demonstrating her coloratura in the wedding number “Two Little Words.”Still, this is possibly Kander and Ebb’s weakest show. — David Barbour