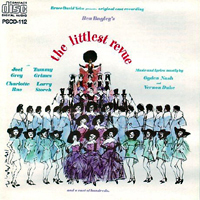 (4 / 5) The vibrant overture on this recording tells us that we’re about to hear one of the tangiest revues of the 1950s. Ben Bagley produced the show. Most of the songs are by Vernon Duke and Ogden Nash, and those that aren’t are by then-unknowns who wouldn’t stay unknown for long: Charles Strouse, Lee Adams, and Sheldon Harnick, to name just three. The hilarious “Backer’s Audition” opener is the work of orchestrator John Strauss, Kenward Elmslie, and John Latouche. The cast is uneven but pretty terrific overall. A young Tammy Grimes is already mannered and throaty, but who cares when she’s introducing “I’m Glad I’m Not a Man,” with Nash rhymes like “battle-axe” / “Cadillacs.” Joel Grey has fun with the mock-Belafonte number “I Lost the Rhythm” (music and lyrics by Strouse). And everything Charlotte Rae touches turns to gold. She’s warm and distinctive in the Duke-Nash song “Summer Is a-Comin’ In,” zany in Harnick’s “The Shape of Things,” devastating in Bud McCreery’s “The Power of Negative Thinking,” and triumphant in “Spring Doth Let Her Colours Fly.” That last-named item, an impudent Strouse-Adams spoof of Helen Traubel’s Las Vegas act, may be the single funniest song from any ’50s revue. The other performers aren’t quite of the Grimes-Grey-Rae caliber; Beverly Bozeman over-belts “Good Little Girls,” and Tommy Morton, more a dancer than a singer, bobbles the fine, odd Duke-Nash ballad “Born Too Late.” But the material, including a couple of CD bonus tracks, is so strong that one columnist was moved to call the show “the My Fair Lady of the intimate revue.” That’s not much of an exaggeration. — Marc Miller