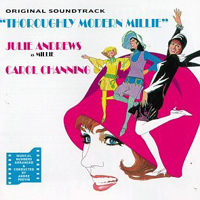 (1 / 5) There’s no explanation for this bizarre camp exercise, which was designed to spoof the 1920s. Julie Andrews and Mary Tyler Moore play flappers seeking their fortunes in the big city, unaware that their hotel is a front for a kidnapping ring run by white-slavers led by Beatrice Lillie (absent on the soundtrack recording, because she doesn’t sing a note in the film). Carol Channing sings “Do It Again” while being shot out of a cannon, and Andrews performs something called the “Jewish Wedding Song.” Thoroughly Modern Millie is barely a musical; it’s just a mishmash of a few old and new numbers scattered about. The album is padded with a lengthy overture, an intermission medley, exit music, and two cuts of the admittedly catchy title tune by James Van Heusen and Sammy Cahn. The ballad “Jimmy,” by Jay Thompson, is also quite good. After that, you’re on your own. Love interest James Fox can be heard talking but not singing (he was dubbed by Jim Bryant) in the Van Heusen-Cahn dance number “The Tapioca.” Channing’s rendition of “Jazz Baby” has probably been studied by drag queens around the globe, and that “Jewish Wedding Song” is beyond description; if they ever do a film remake of Fiddler on the Roof, don’t expect Andrews to turn up as Golde. — David Barbour 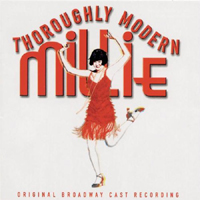 (1 / 5) This show is faux-’20s, faux-camp, faux-everything. The book by Richard Morris (screenwriter of the film version) and Dick Scanlan focuses on the innocent Millie, played by Sutton Foster, whose steely belt and lack of warmth are major debits. Arriving in Manhattan from Kansas, Millie is determined to be “modern” and to find herself a rich husband. Instead, she’s chased by the feckless Jimmy (Gavin Creel) and menaced by the faux-Oriental white-slaver Mrs. Meers (Harriet Harris). The stage score includes “Jimmy” and the title song from the film, plus about 10 new songs (by Scanlan and composer Jeanine Tesori) and borrowings from other sources. Less-than-scintillating comedic turns include a rendition of “Mammy” in Chinese and lovers who burst into “Ah! Sweet Mystery of Life.” Harris wrestles with “They Don’t Know,” one of the flattest comedy numbers in years. Creel gets better songs, including the jazzy “What Do I Need With Love?” and the enjoyable “I Turned the Corner.” Sheryl Lee Ralph, in a rewritten version of the Channing role, sings the clinker “Only in New York” and the catchy “Long as I’m Here With You.” The production number “Forget About the Boy,” in which Millie renounces men, is toe-tapping fun; but Angela Christian and Marc Kudisch, as Millie’s best friend and boss, have to contend with lackluster material. The orchestrations, by Doug Besterman and Ralph Burns, often oversell the songs, particularly in the pumped-up 11-o’clocker “Girnme Gimme.” — D.B.