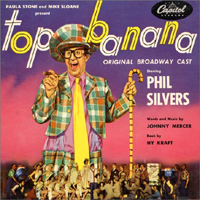 (3 / 5) Some types of comedy date very quickly, and this zany musical expedition into the world of vaudeville comics is an example of that. Still, it’s a wonderful time capsule from the early 1950s, performed by many of the leading comedians of the day. Phil Silvers, Jack Albertson, and Rose Marie joined forces to make Top Banana a solid hit in 1951, and Silvers’ performance won him the 1952 Tony Award for Best Actor in a Musical. While this star vehicle has faded into obscurity, the cast album is a spirited, buoyant tribute to showbiz of another era. The clever songs of the great Johnny Mercer are outstanding; yes, the legendary lyricist also composed the music for this show. The recording is full of gems such as  “I Fought Every Step of the Way,” “A Word a Day,” and others that can still elicit guffaws. — Gerard Alessandrini