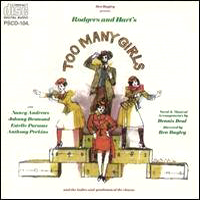 (2 / 5) The world’s oldest collection of co-eds bops to a lower-drawer score by Richard Rodgers and Lorenz Hart in this Ben Bagley recording of a 1939 hit that hasn’t worn well. Although there are attractive songs sung on the campus of Pottawatomie College, including “I Didn’t Know What Time It Was” and “You’re Nearer” (the latter written for the 1940 film version), they’re undermined by Dennis Deal’s blaring arrangements and one of Bagley’s most indulgent exercises in camp interpretation. The vocal arrangements are subpar, too. As for the singers, undergrad Estelle Parsons croaks “My Prince”; Nancy Andrews injects some pizzazz into the glaringly non-P.C “Spic and Spanish”; Johnny Desmond and Arthur Siegel sing well enough without ever coming anywhere near a character. And Tony Perkins, whose ringing baritenor had surprised everyone in Greenwillow, pretty much whispers his vocals here — not ineptly, but without any special insight. Some of the songs do have the old Rodgers and Hart spirit. One example is the opening number, “Heroes in the Fall,” with lyrics ghost-written by Rodgers for the off-on-a-binge Hart. But many of the others (“She Could Shake the Maracas,” “Cause We Got Cake,” and “Sweethearts of the Team” in an excruciating rendition) sound like pale imitations of the team’s better work. — Marc Miller