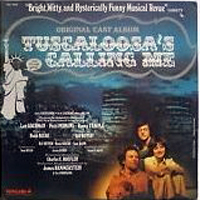 Original Off-Broadway Cast, 1975 (Vanguard/no CD) No stars; not recommended. The dated humor of this revue makes the cast album more of a time capsule than a listening pleasure. Written as a love letter to New York, the score, by composer Hank Beebe and lyricist Bill Heyer, takes lightly satirical swipes at Big Apple attitude (“Everything You Hate Is Right Here,” sung by “Sodom and the Gomorrahs”), nudity in the theater (“Things Were Out”), sex (“Fugue for a Ménage aTrois”), and the dating scene (“Singles Bar”). The archeologically minded will appreciate the two sketches included on the recording, especially the dialogue between a cab driver and an out-of-towner who complains about Broadway theater tickets costing 17 dollars. It’s all very lacking in distinction, although the title tune is rather stirring. Of the three-person cast, only Patti Perkins stands out with her childlike belt. Seventies nostalgists may change the rating above to one star. — David Barbour