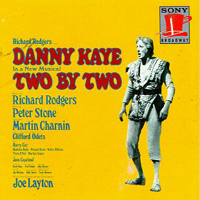 (3 / 5) With music by Richard Rodgers, lyrics by Martin Charnin, and a book by Peter Stone, Two by Two is an adaptation of Clifford Odets’ play The Flowering Peach. The show became notorious for the onstage antics of its star, Danny Kaye, who turned the whole thing into an unruly vaudeville act when he resorted to performing the role of Noah in a wheelchair after tearing a ligament. None of his bad behavior need be suffered on the cast album, although showpieces like “Ninety Again!” and “You Have Got to Have a Rudder on the Ark” do reveal a self-indulgent star. Get past that and you’ll hear mostly excellent, late-career Rodgers; the master infuses ballads like “I Do Not Know a Day I Did Not Love You” and “Something Doesn’t Happen” with his trademark warmth and melodic surprises. Eddie Sauter’s orchestrations have a comfy feel, and Charnin’s lyrics are probably the best of his career, pitched midway between the sentiment of Hammerstein and the dexterity of Hart. The supporting cast is as youthful and exuberant as Kaye is old-school and steeped in shtick: Walter Willison sings out with real Broadway juvenile brio, and Madeline Kahn nails a high C at the end of a vulgar piece of special material. The CD has a brief Act I finale track that’s missing from the LP, and it’s a much better sonic mix.  — Marc Miller