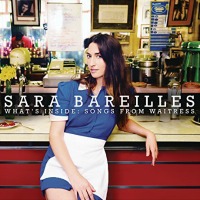 (4 / 5) The idea of Sara Bareilles writing a musical wasn’t so far-out, even before it happened. The 21st century has seen several musical theater scores written by popular singer/songwriters (Kinky Boots, The Last Ship, 9 to 5), and with her insightful lyrics and inventive, pop/soul colored music, Bareilles seemed a natural fit for the modern musical stage. But, gifted as many of these writers are, few have been able to successfully translate their talent to Broadway, so it’s refreshing that Bareilles has done as well as she has in this respect.  What’s Inside is not a cast recording, but more of a concept album that previews Bareilles’ score for Waitress — a musical based on the 2007 film of the same title, about a diner waitress and pie maker extraordinaire named Jenna who’s trying to escape an unhappy marriage, only to discover that she’s pregnant. Though the plot is a bit of a downer, the film used dry humor and charming performances to create more of a grounded, intimate comedy. Bareilles’ songs match the tone of the film and dig deep into the characters, from the deceptively peppy “Opening Up” to the ethereal, dreamlike “Soft Place to Land” to the heartbreaking “She Used to Be Mine.” All of the tracks on this album are sung by Bareilles (with guest vocals by Jason Mraz), and it’s charming to hear her shift from Jenna to other characters throughout. What’s Inside: Songs from Waitress is both a fun showcase for her as a singer/songwriter and a great introduction to her first musical. — Matt Koplik 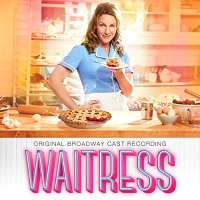 (3 / 5) This recording preserves the score for Waitress as presented on Broadway, with a fair amount of dialogue included on the album, vocal arrangements beefed up, and seven new songs added (“Door Number Three” has been revised to become “What Baking Can Do”). It all feels a little overstuffed. Part of what made Waitress work so well on screen were the grounded performances and the simple, almost quaint way in which the film presented itself as a story of everyday people dealing with everyday situations. By comparison, the Broadway production and this recording are much broader and flashier, and the material suffers because of it; many songs are overwhelmed by the arrangements or lose their emotional potency due to performances that lean more towards caricature than humanity. Also, some of the additional songs — for example “It Only Takes a Taste” and “I Love You Like a Table” — are not as strong as those Bareilles first presented on the concept album. On a positive note, the cast is made up of stellar singers. They bring to the score a Broadway shine that makes the album easily listenable, even if it’s not the best style for the piece. The best thing about the recording is Jessie Mueller in the central role of Jenna. Her voice is essentially as sweet and smooth as Bareilles’, yet versatile enough to delve deep into dark emotional territory and bring aching power to “She Used to Be Mine.” In addition, Mueller is a smart actress who offers the most realistic performance to be heard here. Every time she’s front and center, she wipes away the glossiness that coats the rest of the album, and she brings back the score’s heartbeat. — M.K.