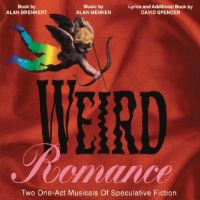 (4 / 5) Composer Alan Menken wrote some of his most dazzling and sophisticated music for this largely forgotten pair of one-act musicals. He and his collaborators — librettist Alan Brennert, lyricist/co-librettist David Spencer, and director Barry Harman –crafted a musical in that most neglected of stage genres, science fiction (also known as “speculative fiction”). The first piece, “The Girl Who Was Plugged In,” is based on a James Tiptree, Jr. story; the second, “Her Pilgrim Soul,” was adapted from an episode of The New Twilight Zone written by Brennert. The cast is superlative: Ellen Greene and Jonathan Hadary, the leads in both pieces, are supported by Danny Burstein, Jessica Molaskey, Valerie Pettiford, Sal Viviano, Eric Riley, William Youmans, and Marguerite Macintyre. If the music isn’t always at the level of Menken’s best — the song “Amazing Penetration” will never be found on a greatest hits album — it’s hard to think of better melodies than the first half’s “Eyes That Never Lie” and the second’s “Another Woman” and “Someone Else Is Waiting.” As for Spencer’s lyrics, they are solid and often clever. The only problem with this cast album is that it’s out of print in CD format, but you can still purchase it as a download. — Seth Christenfeld