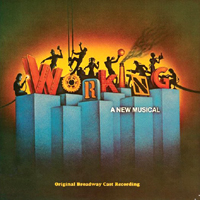 (4 / 5) Studs Terkel’s Working, the 1972 best-selling volume of interviews with Americans discussing the pros and cons of their occupations, struck Stephen Schwartz as a good basis for a musical; so he set about rounding up a group of songwriters, in addition to himself, to musicalize Terkel’s pungent, poignant chats. Craig Carnelia, Micki Grant, James Taylor, Mary Rodgers, Susan Birkenhead, and Schwartz turned out the song vignettes, and everyone from a newsboy to a housewife to a cleaning lady to a retiree showed up onstage to declare their highs and woes. A number of the songs — including Carnelia’s “Just a Housewife” and “The Mason,” and Schwartz’s “It’s an Art” — became popular on the cabaret circuit. Grant’s swinging “Cleaning Women” is another catchy item, as is just about everything else on this resonant recording, which benefits from Kirk Nurock’s tingling arrangements of the songs. To represent the hard-working multitudes, Schwartz tapped some stalwart performers: Lenora Nemetz, Joe Mantegna, Amy Freeman, Susan Bigelow, David Patrick Kelly, Bob Gunton, and others put elbow grease into their singing. The cast is so rich in talent that Patti LuPone appears in the ensemble, with no solo spot. Fynsworth Alley’s CD includes six bonus tracks, four of them featuring Carnelia singing his own songs in his tremulous baritone. — David Finkle 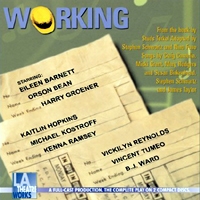 (3 / 5) For this revival of Working, Stephen Schwartz updated the Studs Terkel adaptation he’d overseen decades earlier and to which he had contributed along with the other composers and lyricists named in the review  above. Along with adding more contemporary references, as for example to computers in the workplace, Schwartz used this recording opportunity to create a document of almost the entire show. The album includes not only the potent songs but also the pithy monologues that were lifted from Terkel’s best-seller and then tweaked for dramatic effect. As a result, a much more rounded sense of the show’s power is captured, as compared with the original Broadway cast recording. The company assembled by L.A. Theatre Works mover and shaker Susan Albert Loewenberg includes Orson Bean, Harry Groener, B.J. Ward, Michael Kostroff, Eileen Barnett, Kaitlin Hopkins, Vincent Tumeo, Kenna Ramsey, and Vickilyn Reynolds. Performing before a live audience only a few times, these singing actors may not have had time to achieve the polish of a cast who’ve refined the material during a longer run, but there is certainly no featherbedding here. And it sure is a treat to hear the always lovable Bean, whose list of Broadway credits is surprisingly short, doing so well by Craig Carnelia’s “Joe.” — D.F.