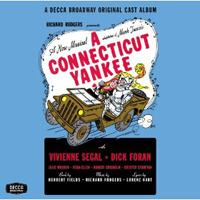 (4 / 5) This Richard Rodgers and Lorenz Hart treasure was belatedly transferred to CD and is now available in beautifully restored, remarkably clear sound. The wonderful 1927 show benefits greatly from the new songs written by the team for this 1943 revival to augment the original score. Included here are some of the last lyrics ever penned by Hart, who died shortly after the revival opened. Among the numbers retained from the original production are the standards “My Heart Stood Still” and “Thou Swell,” charmingly performed by Dick Foran and Julie Warren. It’s fun to hear the actual singing voice of Vera-Ellen, who was always dubbed in Hollywood films; her quirky sound is ideal for this soubrette role. “On a Desert Island With Thee” and “I Feel At Home With You,” her duets with Chester Stratton as the stalwart Sir Galahad, are punchy and humorous. Furthermore, this recording offers Vivienne Segal as Morgan Le Fey, a role that was beefed up for the revival. Her extended version of “To Keep My Love Alive,” one of the new songs, makes it clear why Segal was an acclaimed leading lady of her era. The two other “new for the revival” songs are Segal’s “Can’t You Do a Friend a Favor?” (a duet with Foran) and “You Always Love the Same Girl” (a lusty duet sung by Foran and Robert Chisholm as King Arthur). This CD also includes “It Never Entered My Mind” and three other songs from Rodgers and Hart’s Higher and Higher, performed by Shirley Ross. As if that weren’t enough, The Incomparable Hildegarde’s recordings of four songs from By Jupiter were added, making this revival CD an indispensable Rodgers and Hart compendium. That said, it’s regrettable that Decca chose not to record the one other notable new number written for the 1943 revival of Connecticut Yankee, Segal’s “This Is My Night to Howl.” — Jeffrey Dunn 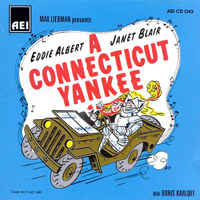 (1 / 5) This version of A Connecticut Yankee was one of a series of 1950s television presentations of Broadway musicals. Based on the 1943 Broadway revival, the TV book was adapted by William Friedberg, Neil Simon, Will Glickman, and Al Schwartz. Included are several songs written for the revival, such as the elusive “This Is My Night to Howl” and “Ye Lunchtime Follies.” The sound quality of the recording is rather poor, but leads Eddie Albert and Janet Blair sing well, although “My Heart Stood Still” is painfully slow. The tempo is also off for the comedy song “On a Desert Island With Thee,” which seems to have been mistaken for a ballad. Several choruses of “To Keep My Love Alive” have been cut but are not missed, given Gale Sherwood’s humorless performance. On the other hand, this album provides a rare opportunity to hear Boris Karloff singing (not very well) as he joins Albert in “You Always Love the Same Girl.” There is a bonus track of “My Heart Stood Still” as performed in the British revue One Dam Thing After Another by Jessie Matthews.  — J.D.