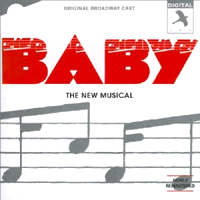 (5 / 5) The first 10 minutes or so are a bumpy ride, with a too-busy opening number that includes some smarmy humor about the conception of a child. Then Liz Callaway sings to Todd Graff, “Picture a flailing spermatozoan / Not even knowin’ where he is goin”‘ — and the sun breaks out, never to leave. The David Shire-Richard Maltby, Jr. score is easily one of the best of the decade, thoroughly contemporary yet melodic and as clever and hilarious as it is heartfelt. When Callaway lets loose with the soaring “The Story Goes On” or when Graff offers the beautiful ballad “I Chose Right,” you could weep at the bad career luck of Maltby and Shire. Other highlights: the strong women’s trio”I Want It All,” the joyous “Fatherhood Blues,”James Congdon’s funny-sad “Easier to Love,” and Beth Fowler’s “Patterns.” (The last-named song was cut from the Broadway production but is generously included here.) Martin Vidnovic and Catherine Cox are wonderful as an infertile yuppie couple, and a belting Kim Criswell figures prominently in the chorus (she’s the mom lamenting the pain of childbirth in “The Ladies Singing Their Song”). Jonathan Tunick’s orchestrations make a great score sound even better, as does Peter Howard’s conducting. Although this musical couldn’t find its audience in its overproduced Broadway mounting, it has done well in community and regional theaters. Thanks to Polydor for having given the score such a complete recording; just zip past the first two minutes or so, and bliss out.  — Marc Miller