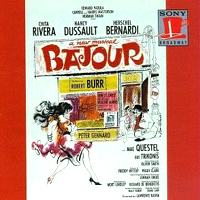 Original Broadway Cast, 1964 (Columbia/Sony) No stars; not recommended. Some ethnic groups have all the luck — and some don’t. The same year that Fiddler on the Roof so beautifully celebrated the joys and sorrows of Jewish life, Bajour featured Nancy Dussault as an NYU anthropology major who latches onto a tribe of gypsies led by Herschel Bernardi. Top-billed Chita Rivera plays the daughter of a rival tribe, doing her trademark spitfire thing and belting out cheesy numbers like “Mean.” Ernest Kincy’s libretto and Walter Marks’ score (astonishingly, inspired by New Yorker stories by Joseph Mitchell) are a mishmash of gypsy intrigue that’s enough to induce a heart attack in the politically correct. The recording starts off with a dynamic overture orchestrated by Mort Lindsey and Dussault’s amusing “Where Is the Tribe for Me?” But too often, Bajour is merely desperate and loud. The second-act show-stopper, “Honest Man,” with Bernardi and rival gypsy king Herbert Edelman trying to con each other, is pretty embarrassing. Give it one star if you’re a Chita fan. — David Barbour