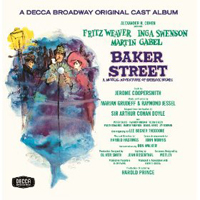 (2 / 5) One of the last in the cycle of My Fair Lady wannabes, Baker Street is complete with handsome Victorian settings, a misogynistic hero (Sherlock Holmes), and a Cockney chorus high-kicking all over London. The problem was that songwriters Marian Grudeff and Raymond Jessel emphatically were not Lerner and Loewe, not even with Bock and Harnick ghostwriting three numbers (”I’m in London Again,” “Cold Clear World,” and “I Shall Miss You”) during the troubled tryout period. The melodic lines are facile, the lyrics occasionally intricate — as in the ironically named “It’s So Simple” — yet it’s all on the surface. As Holmes, Fritz Weaver is fine, but he can’t make anything memorable of the material. His leading lady, Inga Swenson, by all accounts impressive onstage, doesn’t come across on this recording. Even the old-fashioned, three-part, would-be showstopper “Letters” lands with a thud. Martin Gabel as Moriarty, Peter Sallis as Watson, and Teddy Green as a leading Baker Street Irregular round out the cast; they all work hard, but in vain. Although the album is well designed, with color photos and a verbose synopsis, it never convinces you that this was “the hottest musical of 1965.” It’s worth noting that an even shorter-lived show from that year, Drat! The Cat!,  had one throwaway number in it (“Holmes and Watson”) that encapsulated what was special about the duo better than this entire score. — Marc Miller