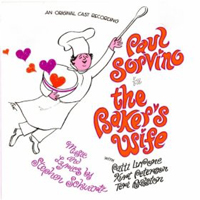 (5 / 5) This beautiful cast album continues to mystify listeners as to why The Baker’s Wife was a huge flop. Based on the play and subsequent film La femme du boulanger by Marcel Pagnol and Jean Giono, the musical’s book is by Joseph Stein, with music and lyrics by Stephen Schwartz. The fable is set in long-ago provincial France, where a middle-aged baker’s young wife leaves him for a torrid affair with a handsome young villager. The show closed on the road to Broadway; most of the cast and creative-team members were replaced during its lengthy tryout tour. When it finally shuttered in Washington, the leads were Paul Sorvino, whose semi-operatic voice sounds great in the songs of Aimable, the baker, on this abridged recording score; Patti LuPone as his wife, Genevieve, belting to high heaven when she has to, but wonderfully warm in the more lyrical passages of the score; Kurt Peterson, appropriately sexy as her young lover, Dominique; and Teri Ralston as Denise, a village woman who gets to sing the lilting “Chanson” in her silvery soprano. All ten songs sung by the principals are superb, from character-establishing numbers like “Merci, Madame” to ravishing ballads like “Endless Delights.” Other highlights include “Gifts of Love,” a gorgeous and poignant piece in which Genevieve resigns herself to a marriage that’s based on companionship rather than passion; “Meadowlark,” the magnificent story-song that the baker’s wife belts out when deciding to go off with her young stud; and “Proud Lady,” sung by the strutting peacock Dominique. Schwartz’s score differs impressively from the style of his monster hits Godspell and Pippin, and the recording boasts lovely orchestrations. — Michael Portantiere 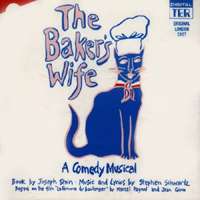 (1 / 5) Even as musical theater completists appreciate the fact that a high-profile London production of The Baker’s Wife yielded this much lengthier recording of the score, it must be said that the results are unpersuasive in terms of both text and performance. Directed by Trevor Nunn, this version has some new Stephen Schwartz songs, along with several that were in the original production but not previously recorded. Still, the two-CD album is disconcerting.  First of all, as presented here, the songs carried over from the earlier recording have many unfamiliar lyrics; Schwartz has a penchant for tinkering with his own work after the fact, but it’s hard to understand the point of such revisions when the new lyrics don’t represent an improvement over the originals. In “Chanson,” for example, we now hear lyrics about gulls crying rather than sheep bleating. Was this change necessary? Severely truncated as the original recording is, it’s sad to report that the new/old songs included on the JAY recording aren’t very interesting. Many of them involve the villagers gossiping about the Aimable-Genevieve-Dominique affair (although, here, the young man’s name is spelled “Dominic”). As for the leading players: Alun Armstrong’s attempt to compensate for his substandard singing voice with fine acting isn’t successful. He also sings the baker’s songs in much lower keys than Paul Sorvino’s, and the results are dispiriting. The plum role of Genevieve is filled by Shar Lee Hill, who is…no Patti LuPone. As Dominic, Drue Williams sings poorly and sounds effeminate, which certainly doesn’t work for this character.  Jill Martin displays the best voice of all the London principals  in Denise’s “Chanson,” but here again, the song is performed in a considerably lower key than on the American cast album, and is therefore far less effective. — M.P.