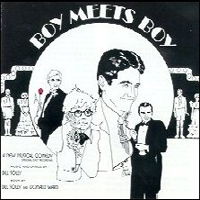 (2 / 5) This show dates from the mid ’70s, but its heart lies more with The Boy Friend than with The Boys in the Band. The creators took one of those cheerfully asinine 1930s musical comedy plots (globe-trotting reporter meets incognito aristocrat) and gave it a gay spin. There’s no post-Stonewall anger here, no Suddenly, Last Summer angst and self-loathing; this show is a fizzy, good-hearted romp. The missing ingredient is a true sense of style. Composer-lyricist Bill Solly came up with some competent wordplay and nice melodies, but the score is more ’70s-generic than ’30s satiny chic. That problem is exacerbated on this recording by the tinny noises of synthesized accompaniment. Still, the small cast performs enthusiastically, and if the result is not a masterful confection, it is a tasty cupcake at the very least. From today’s perspective, Boy Meets Boy seems a period piece twice over, a giddy bauble that appeared just before a very dark time in gay history began. Even nostalgia can wield a double-edged sword. — Richard Barrios 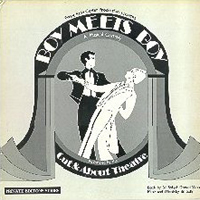 (3 / 5) Boy Meets Boy was sufficiently successful in its initial New York and Los Angeles runs to become a hot item on the burgeoning gay-regional-theater circuit of the late 1970s. (Some playgoers will recall those halcyon days of generous grants from the National Endowment for the Arts.) One company in particular, the Out & About Theatre of Minneapolis, gave Bill Solly’s show a comparatively lavish production. A special boon for the home listener is that the cast album boasts a small but bona-fide orchestra to supplant the nattering synthesizer heard on the original recording; the intrepid orchestrator Brad Callahan worked with Solly to expand the score somewhat, and the added resources give the show more of a faux-Deco sheen. A new overture, extended dance music, and an ingratiating group of performers add to the fun. Calling something “the Original Minneapolis Cast Recording” may sound as camp as anything in the show itself, but this album demonstrates how a good budget and a thoughtful presentation can benefit a little musical.  —R.B.