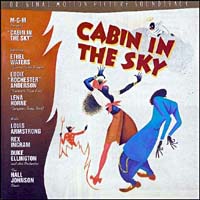 (5 / 5) It may not have been Porgy and Bess, but Cabin in the Sky was, in 1940, a new type of all-black Broadway show. Its tale of a heaven-and-hell struggle for one man’s soul had the dignity of the Gershwin opera combined with the jazziness of some earlier black revues. Composer Vernon Duke, lyricist John Latouche, and director-choreographer George Balanchine propelled the efforts of a superb cast: Ethel Waters, Dooley Wilson, Katherine Dunham and her dancers, Todd Duncan, and Rex Ingram. The result was an overwhelming artistic (although not financial) success. Waters made records of four of the show’s songs, and MGM had the good sense to buy the property for the movies. Only Waters and Ingram remained from Broadway, but few could complain about the new cast members: Eddie “Rochester” Anderson, Lena Horne, Louis Armstrong, Butterfly McQueen, and Duke Ellington and his orchestra. With director Vincente Minnelli in charge, the film adhered closely to the stage show in terms of story and dialogue, but far less so in terms of the score. Still, this soundtrack disc is an absolute joy, a rare example of a movie adding a new song that’s fully equal to anything in the original score: the sublime Harold Arlen-E. Y Harburg ballad “Happiness Is a Thing Called Joe,” sung by Waters. Occasionally, the trademark sighing strings of the MGM orchestra threaten to make the score droop, but then another great performer comes along and things are set right. As icing on the cake, this disc gives us two performances, both cut from the film, of Arlen’s nifty “Ain’t It the Truth.” One is a big-scale production number headlining Armstrong, the other is a creamy purr from Horne. — Richard Barrios 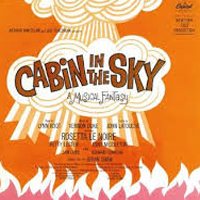 Off-Broadway Cast, 1964 (Capitol/Angel) No stars; not recommended. After many years, a legendary Broadway musical score finally gets a full recording — and no one in the cast can sing! Okay, that’s an overstatement, but it’s close enough to the truth. Cabin in the Sky was revived Off-Broadway in 1964, and composer Vernon Duke declared he was pleased with the result. But, as heard on this Capitol recording, the show was little short of a disaster. Whose idea was it, for instance, to cast the fine, non-singing character actress Rosetta LeNoire in a role created by Ethel Waters, one of the greatest singers in the history of American music? In the Dunham/Horne role of Georgia Brown, Ketty Lester fares only marginally better; her “Honey in the Honeycomb” is frightening from a vocal standpoint, and about as seductive as a speech at a beekeeper’s convention. The men are not quite as bad. But, overall, the only value of this album is that it gives us the show’s full program of songs (excluding the dance music) plus some new/old additions by Duke — including the jaunty “Living It Up,” with Duke-penned lyrics. Still, it could be argued that Cabin in the Sky would have been better served had this album not been made at all.  — R.B.