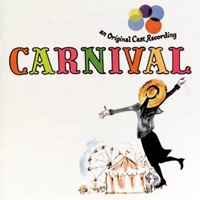 (3 / 5) Is there an odder Broadway musical than Carnival? Even with an all-American creative team, its sensibility — alternately sentimental, stark, and raucous — is distinctively French. In Michael Stewart’s book for the musical, based on the film Lili (from a Paul Gallico novella), Anna Maria Alberghetti is the waifish heroine who joins a traveling carnival after the death of her father. She’s dazzled by the philandering magician Marco the Magnificent (James Mitchell), but real love is waiting in the form of Paul (Jerry Orbach), a disabled war vet who has given up dancing to become a puppeteer. Paul can only express his feelings for Lili through his puppets, and the fact that this conceit doesn’t make you scream is a testament to the authors’ skills. Bob Merrill’s melodic score blends whimsical music-box melodies, big dramatic arias, and comedy numbers into a surprisingly persuasive whole. He effectively dramatizes Lili’s vulnerability (“Mira”) and wonderment at the marvels of the carnival (“Yes, My Heart”) as well as Paul’s inner torment(“Everybody Likes You,” “Her Face”), while also making room for broadly farcical songs like “Humming” and “Always, Always You” for Mitchell and Kaye Ballard as his jealous girlfriend. The show’s most famous song, “Love Makes the World Go Round,” is a haunting little tune. Merrill, who spent much of his career working on flops or serving as Jule Styne’s lyricist, was an underrated talent, as this unique, often wrenching piece reveals. A large set of CD bonus tracks includes the composer delivering demo versions of five numbers, plus four pop covers by, among others, Richard Chamberlain and Mel Tormé.  — David Barbour