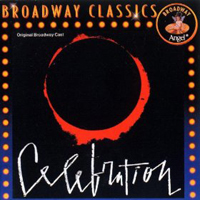 (1 / 5) The hero and heroine are called Orphan and Angel. The villain is a bloated millionaire named Edgar Allen Rich. The production was designed to resemble a workshop.  Its title notwithstanding, Celebration is nothing to celebrate; indeed, it’s one of Tom Jones and Harvey Schmidt’s less successful experiments. Taking its structure “from an. ancient Sumerian ritual play,” and with an underlying theme of the passing of the seasons, Celebration is a flower-power fable pitting youth and goodness against wealth and experience. As reviewer Walter Kerr put it, “I’m surprised the over-50s in the house didn’t retire as a group to the lobby and shoot themselves.” Michael Glenn-Smith is Orphan, who wants the grasping Mr. Rich (Ted Thurston) to give him a garden. Rich manufactures all things artificial — flowers, fruit, foundation garments — and is only interested in having his way with the winsome Angel, played by a somewhat earthier-than-usual Susan Watson. The show starts off strongly with the percussive title number, sung by master-of-ceremonies Keith Charles, and Glenn-Smith scores with his first number, “Orphan in the Storm.” JimTyler’s orchestrations are fairly inventive throughout. But Jones’ narrative is too predictable, and the songs quickly wear out their welcome. This recording belongs in a time capsule. — David Barbour