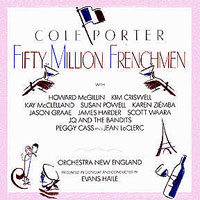 (5 / 5)  Anything Goes may be rated the most fun Cole Porter score, but consider this 1929 hit, a whoop of joy from the late Jazz Age that makes relentless fun of Ugly Americans abroad. This recording of a sparkling concert version, performed by a fine cast at the Alliance Française in New York, seems to capture every subtlety in the orchestrations. Since those orchestrations are by a variety of practiced hands, including Hans Spialek and Robert Russell Bennett, it was well worth the effort. (Check out the happy flutes in “You Do Something to Me,” the klaxons in “Do You Want to See Paris?” and the saxophones everywhere.) Evans Haile’s conducting is pure buoyancy; when he picks up the tempo for the orchestral interlude of “Let’s Step Out,” you’ll want to get up and Charleston. Howard McGillin, an unusually soulful juvenile, gets one of Porter’s best ballads ever: “You Don’t Know Paree.” Jason Graae catches all the innuendo in “You’ve Got That Thing.” Kim Criswell is both a vocal powerhouse and an ideal Porter interpreter, making “The Boy Friend Back Home,” “Find Me a Primitive Man,” and “I’m Unlucky at Gambling” sound even racier than they are. Peggy Cass, although hardly a singer, amusingly croaks something called “The Queen of Terre Haute.” A couple of songs don’t land: “Where Would You Get Your Coat?” is a one-joke affair that goes on and on, “Why Can’t I Have You?” is a too-obvious riff on “Let’s Do It.” But the good stuff here is so good, and much of it so-little-known, that you’ll want to play the whole recording over again the moment it’s done.  — Marc Miller