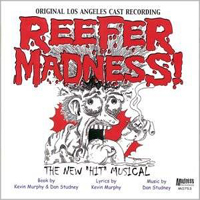 (2 / 5) Musicals don’t come any sillier than the Kevin Murphy (lyrics-book) and Dan Studney (music-book) adaptation of Reefer Madness. This wacky show based on the legendary 1938 “masterpiece” of film propaganda was a big hit in Los Angeles; an Off-Broadway production two years later only ran for two weeks. It would seem that the tale of teenagers whose lives are corrupted and ultimately destroyed by “the green menace” of marijuana would be a natural for musicalization, but the songs are devoid of sincerity, and the whole thing gets tiresome quickly. A few moments stand out: the catchy title number, a strong first-act finale, and one great song, “Listen to Jesus, Jimmy.” The cast is uniformly terrific: Christian Campbell and Jolie Jenkins as the doomed young’ns; Robert Torti as both Jack (the villainous dealer) and Jesus Christ; the hilarious Harry S. Murphy in a variety of roles; the big-voiced Lori Alan as Jack’s pot-addled mistress; Erin Matthews as a self-described “reefer slut”; and John Kassir as a couple of colorful characters. The company is rounded out by a lively ensemble that includes Gregg Edelman, Michele Pawk, and Kristen Bell. David Manning and Nathan Wang lead the strong six-man band, and the recording ends with a pair of bonus tracks: one of them is a nice ballad from a work in progress, the other is a song dumped from Reefer Madness early in its run. — Seth Christenfeld